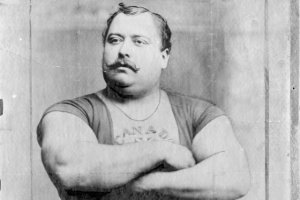 Louis Cyr was a famous Quebec strongman whose career spanned the late 19th and early 20th centuries. His recorded feats, include lifting 500 pounds (227 kg) with one finger and backlifting 4,337 pounds (1,967 kg). In 1892, Cyr set a total of seven world records and earned himself a spot in Canada’s Sports Hall of Fame. According to former International Federation of Body Building & Fitness chairman Ben Weider, Louis Cyr was the strongest man who ever lived. But there is One who has lifted more. His name is Jesus. The Bible says, that He “Himself bore our sins in His own body on the tree, that we…might live for righteousness…” Louis Cyr lifted huge physical burdens. Jesus lifted the burden of the sins of the whole world. Dr. John M Moore wrote a song that describes Jesus burden-bearing. “Days are filled with sorrow and care, Hearts are lonely and drear. Burdens are Lifted at Calvary, Jesus is very near. Cast your care on Jesus today, Leave your worry and fear Burdens Are Lifted At Calvary. Jesus is very near”

Pastor Alex Rockwell
Listen to this message and others here:
https://toolsforhope.com/toolbox/just-a-minute-tools/just-a-minute-mp3-files/